Another lengthy spell in the wilds of Alaska, the Yukon and BC without cell service, wifi or other electronic distractions. We have traveled over 1,000 miles since the last post so I have some catching up to do. I had reported that when we left Wolf Creek we were headed to Watson Lake. Things change and instead we ended up at Snag Junction, just over the border from Alaska to the Yukon. It ended up being a long 265 mile day because we got stuck at the border crossing for almost an hour. Along the way we saw some big rocks. 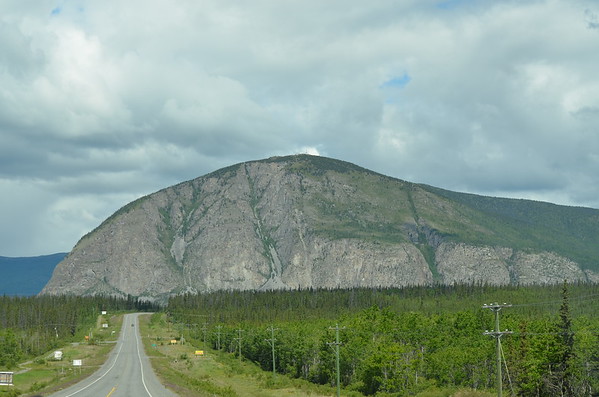 From Snag Junction we traveled 275 miles to Wolf Creek, YT, just outside Whitehorse. This was a lucky find because we got just about the last site that we could fit our truck into. There was a huge graduation party going on and most of the campground was taken by folks celebrating graduation – loud music, karaoke (with lots of golden oldies), and lots of food and dancing. These folks knew how to party and we were thrilled to be at the other end of the campground. We could barely hear them!

From here we decided to take the Cassiar Highway so we headed east on the Alaska Highway to the junction with highway 37, the Cassiar, where we stopped for fuel before heading down the sparsely settled and service deprived Cassiar.

We traveled about 40 miles down the Cassiar and turned into Boya Lake Provincial Campground not expecting much but ready to quit for the day after 302 miles of rainy weather. Did we ever get a surprise.

Boya Lake is a hidden gem. We had no expectations and expected to just overnight there. We ended up spending two nights at this beautiful spot.

From Boya Lake we headed south of the Cassiar and made a stop at Jade City, home of the mining operations of Cassiar Mountain Jade.

Of course we had to contribute to the local economy and buy a few things to bring back home. Jade City is also starring in a Canadian Discovery Channel reality TV series (not seen in the US yet) so we bought a DVD just for the fun of watching the show.

From Jade City we continued on to Meziadin Provincial Campground for the night, remarkable only for the mosquitoes. Apparently BC has outsourced management of some campgrounds to private enterprises – unfortunately we found the private operations not up to the quality of the government run camps.

From Meziadin we continued south to the end of the Cassiar and turned east on the Yellowhead Highway, Canada 16. There is another name for this road that evokes more emotion – Highway of Tears. You can learn more about this sad stretch of road here https://en.wikipedia.org/wiki/Highway_of_Tears_murders or here http://highwayoftearsfilm.com/.

There are billboards along the road, reminders of the tragic history associated with this route.

We continued on to Houston, BC, where we stopped for a break and lunch. The city intrigued us because it advertises it has the world’s largest fly rod.

We ended this day in Fraser Lake, BC after another 300 mile day. Fraser is another example of the pride and generosity of these small Canadian towns.

From Fraser Lake we continued on the Yellowhead to McBride, BC and a nice little private campground, Beaverview. The folks running the campground were very gracious and pleasant – their mosquitoes, not so much. I mention the mosquitoes because we are starting to see a lot more mosquitoes and other bugs as we head farther south and move closer to July. While we were in the Alaska and the Yukon we were essentially bug free but it appears that luxury has come to an end. The truck windshield is now almost opaque at the end of the day and the front of the white camper is almost black from the carnage we wreak on the flying denizens of southern BC and Alberta.

Tonight we have concluded a 353 mile day at Spruce Grove RV Park in Fairmont Hot Springs, BC. We traveled down the Icefields Parkway, re-tracing our route of some weeks ago in reverse. The temperatures were in the mid to high 80’s as we arrived here so we opted again for power and water so we could run the AC and cool down after a long day driving. Tomorrow we will be back in the USA (assuming they will let back in), and probably boondocking somewhere around Kalispell or Missoula, MT since every campground from here to Missoula appears to be full up until after the 4th. We picked a tough weekend to head back – Canada’s 150th birthday followed by our 4th of July. Happy birthday to Canada and to us!