The day started cool and early as we left Glacier Campground at 0730. We were advised by the Alberta travel folks to not take 93 north, my original plan. They suggested taking 2 to 93, 93 north to 3, 3 east to 22 and then 22 north to Okotoks. After taking the trip today I can vouch for their good wisdom.

Montana has a macabre but fairly effective way to remind drivers to be careful and pay attention to their driving. Because the speed limits in Montana are 70MPH on state roads and 80 MPH on the interstates I suspect most crashes are pretty serious. The state posts little white crosses along the highways at the site of fatal accidents.

We crossed into BC on 93 and continued north, not really knowing what we might expect as we traveled north and then east. What a pleasant surprise to discover that this road was every bit as scenic as the roads through Glacier Park.

This is coal mining country and there are signs of mining on the heights of the land all along route 3.

Apparently Alberta has wildlife issues and they are experimenting with some warning signals to alert drivers to animals in the road ahead. Vermont might want to check with Alberta to see how well this system is working.

Route 3 east is also the site of the worst landslide disaster in Alberta history. I’ll let the markers tell the tale. 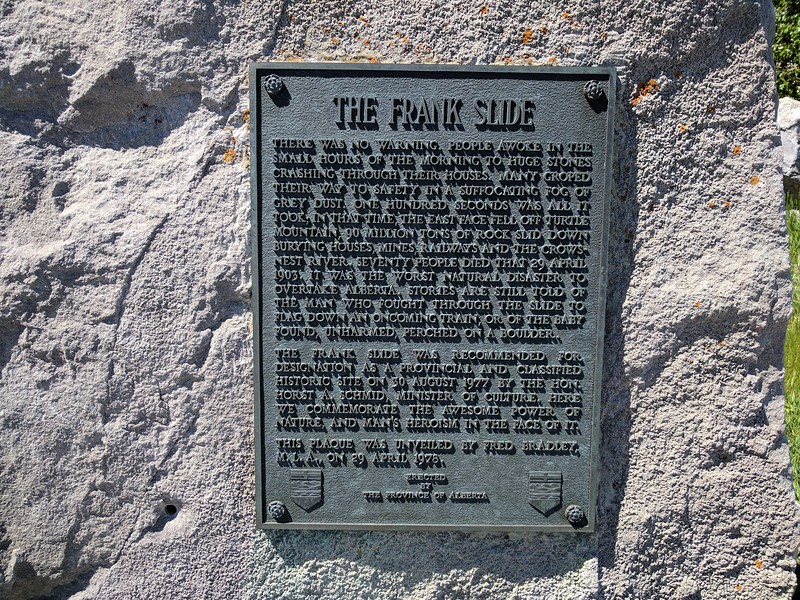 Route 22 north is called the Cowboy Trail and it was soon clear why we were directed this way. As you drive north, to your left the horizon is punctuated with a massive, snow covered ridgeline of the Canadian Rockies.

The contrast between east and west as you drive north is spectacular and I highly recommend this route over 93 if you are traveling this way.

Our stopping point for today is 274 miles from where we started, in a Walmart parking lot where we hope things will quiet down so we can have a peaceful night’s sleep. Next stop may be Banff, a short trip, but a base from which to launch a long day’s drive to Jasper.